Sanctuary Bathrooms have been installing bathrooms in Hampton Middlesex since their establishment in 2005.

There are many period properties within Hampton so when designing bathrooms for our clients we always need to be sympathetic to the properties age combined with the clients present day requirements – often carefully mixing old with new.

This can include utilising lots of soft natural materials such as wood panelling detail on the walls, a traditional roll top bath sited elegantly under a large sash window or ornate taps and shower fittings emulating a bygone era.

Hampton is based on the River Thames in the borough of Richmond Upon Thames.  The area is made up of Hampton, Hampton Hill, Hampton Wick, Hampton Court and of course the infamous Hampton Court Palace which is steeped in history.

The famous Hampton Court Palace was originally constructed for Thomas Wolsey in 1514, and the palace was then passed to King Henry VIII in 1529 when the Cardinal lost popularity with the King.  Henry VIII went on to extend the Palace.  The next Royal to affect the palace was William III who rebuilt and expanded it but work was then postponed in 1694 which has left the palace with two very differing styles; one part Tudor and the other Baroque.

Hampton has a local railway station which provides great transport links to the adjoining areas of Teddington, Sunbury, Shepperton, Twickenham and Richmond.   Bushey Park adjoins Hampton and Teddington and serves the areas with some amazing landscape and greenery.

Locally Hampton is also well known for it’s Heated Open Air Swimming Pool which is one of the few remaining outside swimming pools outside London and open all year round.

Find out more about our quality bathrooms.

If you are looking for a new bathroom in Hampton, contact us today on 01932 255465 to book an appointment with one of our designers. 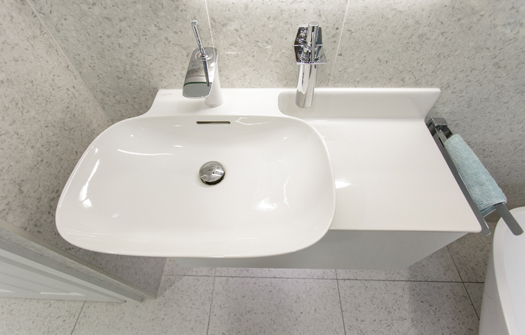 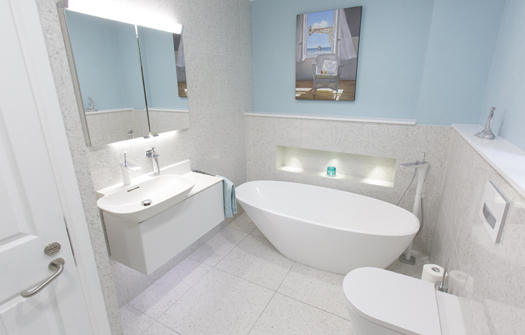